Good turnout for the Laser training. The wind wasn’t too cooperative, but a fun and useful couple of hours (with Duncan Skingley providing entertainment with his no-wind capsizing skills

).Many thanks to Keith Wilkins and Linda for running the session.

We now have all the race marks out on the river, 2 safety boats on the pontoon and dinghies ready on the shore !! So looks like Sunday 18th April sailing/practice racing is ready to go ….. Let me know if you would like to use a club boat.

Phil’s battleship grey RS400 was the perfect foil for duelling dinghies on a gusty grey day on the Helford.   A Met office forecast for the Lizard suggesting SW 4 was mirrored on the river with Gusts to + 30 knots by race end.

The Biggs’ continuing their consistent form regardless of conditions this season , started first in their National 12 – only succumbing to the rapier like speed of the RS400.  A minute after the N12 the lasers of Brooks & Ginnie Sykes commenced a chatty & congenial intercourse for the long planning run to Toll before separating for the hard beat upriver.

Both Emily Broad and Ginnie delighted in taking a warm spa treatment in the central section of the river – Ginnie, pausing for a restorative with her sister in law Katie at the safety boat. Emily & Tom with no further need of dagger board inspection saw of any further challenge from the lasers & Chris & Ed Hosken’s  laser II.

Many’s the father and son team have graduated from the Laser II – an experience similar to formula one racing with wet spaghetti for control lines.  Much to Ed’s chagrin the spinnaker would not deploy from behind the main halyard, thus reducing downwind speed – but which had nothing to do with their dunking on the long beat home after race end. Or for that matter 3 little dry ones by Brooks in front of the clubhouse where Phil and Carrie having not quite lapped him were found dry and the RS’s all stored away. 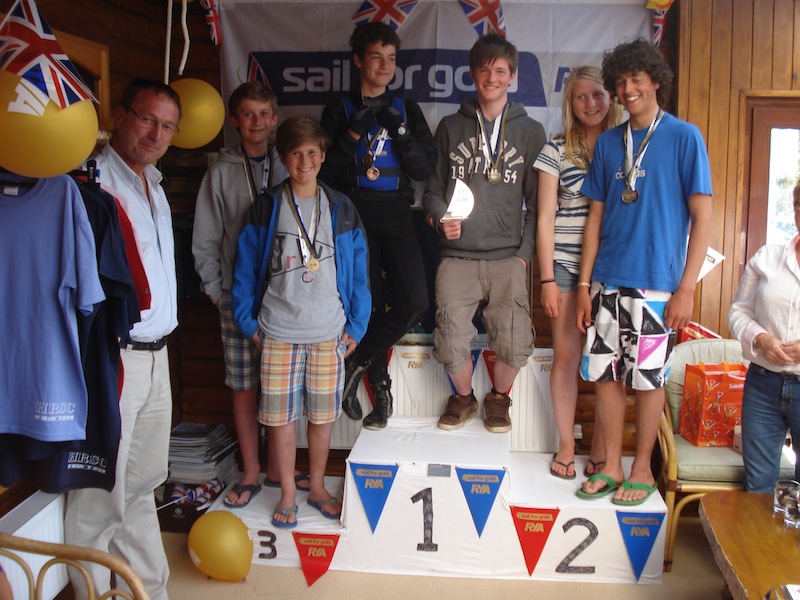 150 sailors aged between 9 and 65+ competed in a two-day regatta at Helford River Sailing Club (HRSC) last weekend (14/15 July). Enjoying force 4 westerly winds, and with only one downpour, the event was part of the RYA Sail for Gold initiative which celebrates and supports the Team GBR sailors who are about to start their 2012 campaign.

Saturday’s racing involved three windward/leeward course races and one regatta course race for a fleet of Hunter 707 yachts and a Portsmouth Yardstick handicap fleet. Hunter 707 winner was Phil Samuel in Red Snapper, with Phil Badger in Wildebeest second and Ed Bolitho in Miss Moneypenny third. Winner of the handicap fleet was Chris Symes in Valkarie, with Andy Dennis in Orijin second and Miles Kirkby in Supergroove third.

On Sunday, there was a five-race series for two classes of dinghy – A handicap fleet and an RS Feva fleet – which formed part of the RYA OnBoard Cornwall Travellers Series. The competitors were joined by young sailors from St Mawes Sailing Club, Rock Sailing Club and Helford River Children’s Sailing Trust who learned to sail with RYA OnBoard, the scheme that introduces children of all backgrounds and abilities to sailing and windsurfing.

Elliot Wilkinson and Tristan Calverey from St Mawes Sailing Club won the Feva fleet, with Matt Chaplain and Laura Vinton from Rock Sailing Club in second place and Freddie and William Barnes from St Mawes in third. In the handicap fleet, Bob and Jack Warren from Restronguet Sailing Club were the winners, with Phil Samuel second and Adam Mason third.

In the third race, young Optimist sailors Sam Philpott & Finlay Walsh-Newton came through to finish first and second, and claimed the under-18s prize for the handicap fleet.

Phil Samuel was a medal winner on both days, taking gold on Saturday and silver on Sunday sailing his Laser. Claire Sharp was the first lady helm.

After Sunday’s racing, HRSC  laid on a cream tea for competitors, before the prize giving which involved an Olympic-style podium constructed by local carpenter/joiners Ollie Chamberlain and Ed Bolitho. Both men competed on both days of the regatta, even risking a bronze medal placing in Ed’s 707 Miss Moneypenny on Saturday, so they successfully put their craftsmanship to the test!

Mark Belshaw, RYA Regional Club Coach and OnBoard Development Officer, said: “HRSC has put a lot of effort in to make this a memorable event – a lot of people have worked very hard to make things work – especially the dinghy and yacht captains Beccy Kestin and Chris Symes. The event was really well supported and we had a great couple of days’ racing, with an Olympic theme to celebrate the 2012 games and support our team GBR sailors.”

RYA OnBoard is a grass roots programme which introduces sailing and windsurfing to young people aged 8 to 18, through schools, youth groups and training centres. For more information visit the OnBoard website www.ruob.co.uk.

To find out more about Sail for Gold programme visit www.rya.org.uk/sailforgold

RS400 Wins In Pursuit of Happiness

Happiness is in Pursuit of Adam Mason’s Pants, in a light breeze with every scrap of sail cloth devoted to the enterprise. Under competent hands the largest sail area wins – and on Saturday at least the results were in order of sail size.

A great credit to all those behind the action for selflessly putting themselves forward for duty .